Siblings went to church service after having same dream.

April 19, 2014 By Our East Africa Correspondent - Leave a Comment 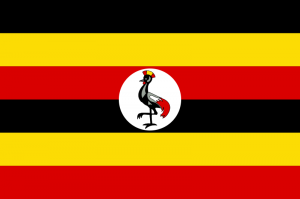 Flag of Uganda. (Wikipedia)
NAIROBI, Kenya  (Morning Star News) – The 17-year-old daughter of a Muslim man in Uganda was able to attend one church service this month before he killed her for leaving Islam, sources said.
Abdul Hakim Ibanda of Kamuli town in eastern Uganda beat Nanvunani Shamimu and her 19-year-old sister, Nawudo Hasifa, with a blunt instrument after learning that they had attended the church service on April 6, Hasifa told Morning Star News.
The two sisters turned to the Christian faith after they had the same dream the night of April 4, she said.
“We both saw a man dressed in white clothes, telling us to go and be prayed for in the church, but he did not tell us which church to go to,” Hasifa said.
On April 6 they attended United Believers Church in Kawaga, Kamuli District. “On Sunday morning we arrived at the United Believers Church and straight away went to see the pastor and explained to him about the dream and that we were ready to be Christians,” she said. “The pastor prayed for us to accept Jesus as Lord and Savior of our lives. After prayers we then went to church, where the pastor introduced us to the church and that we were new members of the church. The church faithful were cheerful to receive us.”
Area Muslims who saw them enter the church building immediately reported it to their father, sources said. He gathered a group of 32 youths to attack the church, said pastor Musis James of United Believers Church.
“When we saw the rowdy youth approaching the church, the Christians made an alarm and we all left the service in readiness for any eventuality,” James said. “Some of the Muslims retreated, while a few came to where we were and warned us that the two girls should not worship with them, then they left.”
The two sisters arrived home that evening to find their father was furious.
“Our father did not even greet us, but immediately questioned us why we decided to attend the church,” Hasifa said. “We kept quiet. Our silence angered our father. He removed a blunt object and started beating us indiscriminately. My sister was hit somewhere near the neck. She fainted and became unconscious. My father got shocked and stopped beating me. He tried to wake up my sister, but there was no response. I knew she was gone.”
Ibanda wanted to kill her also, Hasifa said, but he was also overcome with fear and decided to perform Islamic ablution. He told her to fetch some water outside for the ritual cleansing.
“When I got out of the house, I decided to slowly escape to the home of a nearby church elder, but I was feeling a lot of pain,” Hasifa said.
The church elder put her on a motorcycle and drove her to an undisclosed town where she sought refuge among Christians.
“She arrived at my house bleeding,” the pastor of the area church, undisclosed for security reasons, told Morning Star News. “Her left hand was also injured. We as a church have taken the responsibility of taking care of her.”
The pastor said that when he mentioned to Hasifa that they must report the case to police, she wept and said, “You people want my father to kill me the way he killed my sister?”
At the same time, Hasifa granted permission for Morning Star News to publish her account of the attack.
“The girl is still traumatized as a result of the death of her sister and needs prayers and counseling,” said the pastor in the majority-Christian nation, which is 11.5 percent Muslim, according to Operation World. Hasifa told Morning Star News her father would not want her to return home. “I know I cannot go back to my father because I have become a Christian,” she said. “I am grateful to the church for welcoming me and taking me as their child. I now have a new home.”

Posted by Foxmuldar Blog at 7:09 PM