Its not just the UK thats suffering from Muslim gangs. Here in America we have the same problem. As in the UK the media continues to cover it up. 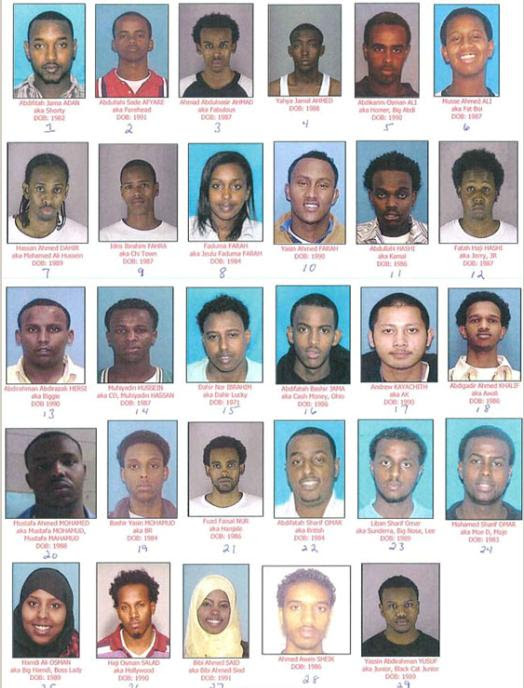 Over two dozen Somali Muslims, including women, were indicted for kidnapping, raping and selling underage girls.
It’s the largest human trafficking case in US history.


A federal trial involving more than a dozen defendants accused in a sex trafficking ring run by Somali gangs is being complicated by cultural issues within the Somali refugee communities in Tennessee and Minnesota.

U.S. District Judge William J. Haynes again this week ordered jurors to return on Monday as defense attorneys argued that the defendants, many of whom are refugees from Somalia, were juveniles at the time the alleged crimes occurred.
The indictment said three gangs called the Somali Outlaws, the Somali Mafia and the Lady Outlaws were forcing teenage girls into prostitution and operated in St. Paul, Minn.; Minneapolis; Columbus, Ohio; and Nashville.
After selecting a jury last month, the trial was delayed last week when prosecutors turned over thousands of documents and audio recordings from the investigation to defense attorneys on the eve of trial. Both defense attorneys and federal prosecutors have repeatedly declined to comment about the case.
“It can be frustrating to have delays, but it is understandable because the case is so complex,” said Derri Smith, executive director of End Slavery Tennessee, who will be an expert witness in the case. “I have the utmost confidence that the judge and jury will bring justice about in the case, but it’s challenging for all of them.”
The indictment, which was originally unsealed in 2010 and amended by a superseding indictment in 2011, says the defendants, many of them from the Somali immigrant communities in Minneapolis and Nashville, were members or associates of the three gangs. Four unidentified victims, some of who were under the age of 14, are listed in the indictment.
The indictment accuses the gangs of finding and recruiting young girls for the purpose of prostitution in exchange for money and drugs between 2000 and 2010.
Out of the 30 individuals listed in the indictment, only 14 are going to trial this month in Nashville on charges of conspiracy to commit sexual trafficking of children by force, fraud or coercion and charges related to the sexual trafficking. Many of the individuals have remained in federal custody since their arrests in 2010.

Posted by Foxmuldar Blog at 2:45 AM