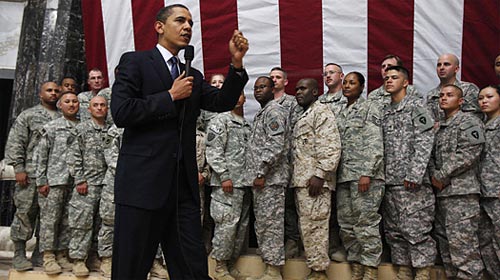 
Michael Hastings’ new book, The Operators, jabs at what could be a vulnerable spot for the Obama Administration, the president’s relationship with the troops.

The book describes a visit to Baghdad:

After the talk, out of earshot from the soldiers and diplomats, he starts to complain. He starts to act very un-Obamalike, according to a U.S. embassy official who helped organize the trip in Baghdad.

He’s asked to go out to take a few more pictures with soldiers and embassy staffers. He’s asked to sign copies of his book. “He didn’t want to take pictures with any more soldiers; he was complaining about it,” a State Department official tells me. “Look, I was excited to meet him. I wanted to like him. Let’s just say the scales fell from my eyes after I did. These are people over here who’ve been fighting the war, or working every day for the war effort, and he didn’t want to take fucking pictures with them?”

What a contemptible piece of dirt.
Labels: Barack Hussein Obama, degrading US military capabilities
posted by Carl in Jerusalem @ 11:45 AM

Posted by Foxmuldar Blog at 2:55 AM