Elisabeth’s Voice: An Appeal to the American Blogosphere 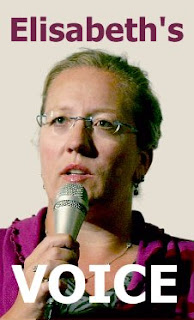 We, the undersigned — consisting of four European blogs, one Canadian blog, and one American blog — have written this post jointly as a public call for our American colleagues to take up the cause of the Austrian feminist and anti-jihad activist Elisabeth Sabaditsch-Wolff.

Geert Wilders is well-known to most American conservative and libertarian bloggers, but Elisabeth’s case is not so prominent. Like Mr. Wilders, she faces trial for reporting factual information about Islam. Her “crime” was to conduct public seminars in which she described Islamic doctrine, quoted from the Koran, and explained to her listeners what she considers the dangers of Islam.

Like Mr. Wilders, Elisabeth has been charged with “hate speech” for her words. Unlike Mr. Wilders, however, Elisabeth is a private citizen, a wife, and the mother of a small child. She lacks the major resources necessary to defend herself against the well-funded organs of the state which seek to persecute her.

Elisabeth will go on trial in Vienna on November 23rd, in what is clearly a political action intended to silence anyone who dissents against the prevailing multicultural orthodoxy.

Americans may think that Elisabeth’s is a uniquely European plight, and has nothing to do with them. But make no mistake about it: the same repression is on its way to the United States of America. As the recent cases of Molly Norris, Juan Williams, and Derek Fenton demonstrate, free speech may already be taken away by non-juridical means. Dissent is even now being silenced in schools and on college campuses, and politically incorrect expression is cause for dismissal from both public and private employment.

The same types of “hate speech” laws that were used against Elisabeth in Austria are being prepared for the United States through the work of the United Nations. At the initiative of the Organization of the Islamic Conference, the UN is on the verge of requiring all member states to pass laws criminalizing “the defamation of religions, including Islam.”

Your president, Barack Hussein Obama, has indicated his support for the UN’s proposed resolution. Time is running out for all of us. If we don’t stand up now for people like Geert Wilders, Ezra Levant, Mark Steyn, and Elisabeth Sabaditsch-Wolff, there will be no one to stand up for us later, when our turn comes.

Links to detailed information about Elisabeth’s case may be found at the bottom of this post, along with a link to her legal defense website where you may donate to her cause.