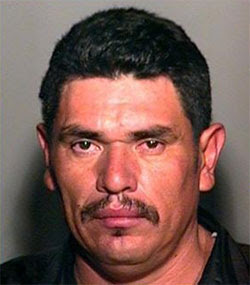 Crisantos Moroyoqui, 36, has been arrested for the beheading of a man in Chandler, Arizona. Moroyoqui, an illegal alien, is said to have beheaded the victim after an argument. The victim and friends went to a casino after the argument. The next morning the stabbed and beheaded body of the victim was found on the living room floor with his head laying nearby.

Police followed bloody footprints to a residence nearby and found Moroyoqui with what appeared to be blood on his pants and shoes. Law enforcement is still looking for three other suspects in the case.

Chandler Detective Frank Mendoza said they rarely encounter these types of cases. Police also say that Moroyoqui has refused to cooperate with police.

I argue that we will see more and more as the escalation of criminals inside our country is allowed to continue unpunished.

It's funny to note that in the article below it is not mentioned that Moroyoqui is an illegal alien in print; yet in the video report by the reporter it is noted and stated that Moroyoqui could face further charges for his illegality. I won't hold my breath on the other charges.

Here are the other three men they are looking for. They may be traveling in a 2003 red Ford Explorer with California license plate 6FWR784.

The second suspect is Jose David Castro Reyes. He is a 25-year-old, Hispanic, 5 feet 10 inches tall and 180 pounds. He has short hair and is clean shaven. He was last seen wearing a white shirt, white T-shirt and jeans.

The third suspect is known only as "El Joto". He is Hispanic with a thin build and short spiked black hair and a goatee. He was last seen wearing a black patterned shirt, white T-shirt and jeans.

Most likely these three are allready back in Mexico. JMOP
Thank you Obama for doing such a fine job at protecting the citizens of American from the Ilk of so many Illegals that end up commiting crimes and even gruesome crimes as this one.
Posted by Foxmuldar Blog at 4:51 PM