The Big Mac Attack On ObamaCare 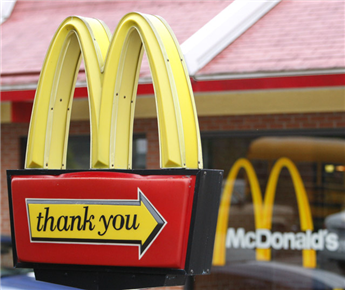 IBD Editorial Health Care: A big employer mulls dropping health insurance coverage due to ObamaCare's mandates. The claim that if you like your plan you can keep it was a lie, and the effort to destroy private insurance is working.

They get minimum coverage at a minimum price, but most younger workers are healthy and for that reason, they constitute a high percentage of the uninsured. What McDonald's Corp. offers is not a one-size-fits-all nanny-state special that forces young males to pay for mammograms.

President Obama promised that under ObamaCare these workers could keep these plans, but McDonald's has told federal regulators in a memo that it would be "economically prohibitive" for its insurance carrier to continue to cover its hourly workers unless it receives a waiver to the ObamaCare requirement that 80% of premiums for such "mini-med" plans be spent on medical care.

Other large employers who offer such plans could find themselves in the same dilemma — companies like Home Depot, CVS, Staples and Blockbuster. The net result for many would be going from minimal coverage that fits their current needs to no coverage at all — at least until 2014, when ObamaCare is in full swing.

Democrats wanted the requirement, called a medical loss ratio or MLR, to guarantee insurers wouldn't squander premiums on things like marketing while competing with other insurers.

McDonald's and others say the MLR is unrealistic because of high administrative costs due to high worker turnover.

This administration doesn't understand how businesses operate and really doesn't care. As for private insurers, the White House doesn't care if they're driven out of business due to higher costs. We now know health care premiums and costs will rise due to Obama-Care, another health care reform lie.

The Congressional Budget Office recently concluded that "premiums for millions of American families in 2016 will be 10% — 13% higher than they otherwise would be. This represents a $2,100 increase per family, compared with the status quo."

Such plans are examples of the innovative ways to provide both coverage and choice private insurers can provide, but such "niche" products are in danger. We recently commented on how major insurers have dropped or will drop "child-only" policies because of the ObamaCare requirement that children with pre-existing conditions be covered without question.

Companies such as McDonald's, and insurance companies too, must manage their bottom lines to stay in business. ObamaCare distorts a system based on risk and turns it into an entitlement that is based on political considerations and aimed at getting as many people totally dependent on government as possible.


According to a report released by Sens. Tom Coburn of Oklahoma and John Barrasso of Wyoming, millions will face losing the plans they now enjoy "as employers either drop coverage or purchase more expensive, government-dictated health insurance."

It's not just younger workers that will lose out. Seniors will too, no matter what Andy Griffith says in those ObamaCare political ads disguised as public service announcements. On Tuesday, Harvard Pilgrim Health Care in Massachusetts dropped its Medicare Advantage program, leaving 22,000 seniors to find other, more expensive coverage.

Harvard Pilgrim expressed doubts about Medicare and Medicare Advantage's long-term viability, given the hundreds of billions being drained from both programs to maintain another administration fiction — that health reform will help reduce budget deficits.

The irony here is that in this jobless bummer recovery, an hourly position at McDonald's may be the only thing people entering the work force can find.
Posted by Foxmuldar Blog at 3:56 PM