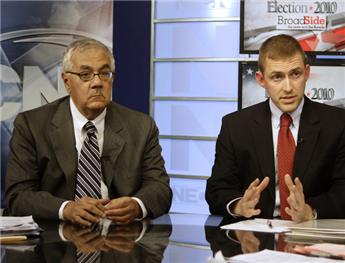 Subprime Scandal: Democrat Rep. Barney Frank may be running for re-election for the 15th time, but he can't run from his record of shilling for affordable loans. His GOP foe is calling him on his lies.


Boston entrepreneur and Marine Sean Bielat came out swinging in a pair of debates this week, blasting the 30-year congressman as "one of the leaders of the economic disaster" and pointing out that as a veteran of the House banking panel, Frank pushed Fannie Mae and Freddie Mac to load up on risky mortgages while fighting proposals to reform them.


That sent the fast-talking Frank into orbit. "That's exactly the opposite of the truth," he insisted. "I have been leading the fight — unfortunately when we were in the minority it wasn't successful — to stop homeownership for low-income people."

But Frank's famously fast tongue is also forked: As Fannie and Freddie took on billions in subprime debt, he insisted they were not facing "any kind of financial crisis," and urged more affordable lending. "The more people exaggerate these problems, the more pressure there is on these companies (to reform), the less we will see in terms of affordable housing," Frank said in 2003.

In a hearing held later that year, he seemed to acknowledge the risks. Only, he thought subsidizing low-income, first-time homebuyers was more important: "I do think I want to roll the dice a little bit more in this situation towards subsidizing housing."

Confronted with the quote by one of the debates' moderators, Frank explained that he meant subsidized rental housing. Sorry, that dog won't hunt, either. In 2005, Frank said: "Those of us on our committee will continue to push for homeownership."

And he didn't just push for it via Fannie and Freddie, but also through the Community Reinvestment Act, which mandates banks make riskier urban home loans. In fact, he backed President Clinton's historic changes to the law, which forced banks for the first time to hit numerical targets for affordable mortgages. The tougher rules triggered an explosion in subprime lending.

Backed into a corner, Frank blamed Bush for doing what he himself did. "I was critical of the Bush administration," he maintained, "because they pushed Fannie Mae and Freddie Mac to increase the number of low-income homeownerships."

Not so fast. For starters, Bush inherited the affordable housing targets set by Clinton, which mandated Fannie and Freddie devote fully half their business to affordable lending. When Bush nudged those goals higher in 2004, Frank raised no alarms. In fact, he said it "serves us badly to raise safety and soundness issues."

What's more, Frank was one of the architects of the 1992 legislation authorizing HUD to slap the affordable housing goals on Fannie and Freddie in the first place. Then he demanded the mortgage giants relax their standards to meet those goals.

Bielat is right. If anyone in Congress deserves blame for the subprime crisis, it is his opponent. Let's hope Massachusetts voters agree. The economy can no longer afford Frank and his costly affordable-lending crusade.
Posted by Foxmuldar Blog at 7:32 AM