Sununu: The Obama campaign is a ‘bunch of liars’ 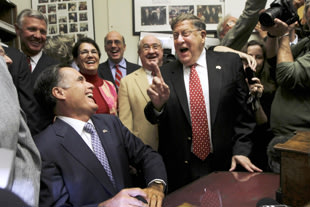 
IRWIN, Pa.—John Sununu, a top surrogate to Mitt Romney's presidential campaign, issued a withering attack against President Barack Obama Tuesday, accusing him and his campaign of being "a bunch of liars" for their attacks on the presumptive GOP nominee.
Speaking on a Tuesday conference call with reporters, the former New Hampshire governor, who has emerged as one of Romney's most aggressive defenders, slammed Obama's campaign for suggesting Romney might have committed a "felony" for misstating his role at Bain Capital.
But Sununu issued a nearly equal counterpunch, telling reporters Obama "comes out of that murky political world in Chicago where politician and felony has become synonymous."
Still, Sununu added, "I am shocked that the president introduced the word 'felon' into the political discourse."
The call was organized by Romney aides to attack Obama's handling of the economy, which they argue has stifled job creation and hurt small business. But Sununu seemed to take it a step further, telling reporters at one point, "I wish this president would learn how to be an American."
Asked to clarify his statement, Sununu walked it back, explaining he only meant that he wished Obama would adopt the "American formula" for creating businesses and introducing an environment where "entrepreneurs can thrive."
Still Sununu was back on the attack seconds later. Asked about a new Obama ad that suggests Romney won't release additional years of his tax returns because they might show he didn't pay taxes, the former governor trashed the Obama camp as "stupid."
"If (Romney) didn't pay taxes, you don't think the IRS would be knocking on his door? The IRS would have knocked at his door, and we would know all about it," Sununu said. "The Obama campaign has once again demonstrated that they are clearly and unequivocally a bunch of liars."
In response, Lis Smith, a spokeswoman for the Obama campaign, said the Romney campaign "has officially gone off the deep end."
"The question is what else they'll pull to avoid answering serious questions about Romney's tenure at Bain Capital and investments in foreign tax havens and offshore accounts," she said in an email to reporters. "This meltdown and over-the-top rhetoric won't make things better. It only calls attention to how desperate they are to change the conversation."
http://news.yahoo.com/blogs/ticket/sununu-obama-campaign-bunch-liars-162012671.html
Posted by Foxmuldar Blog at 10:46 AM